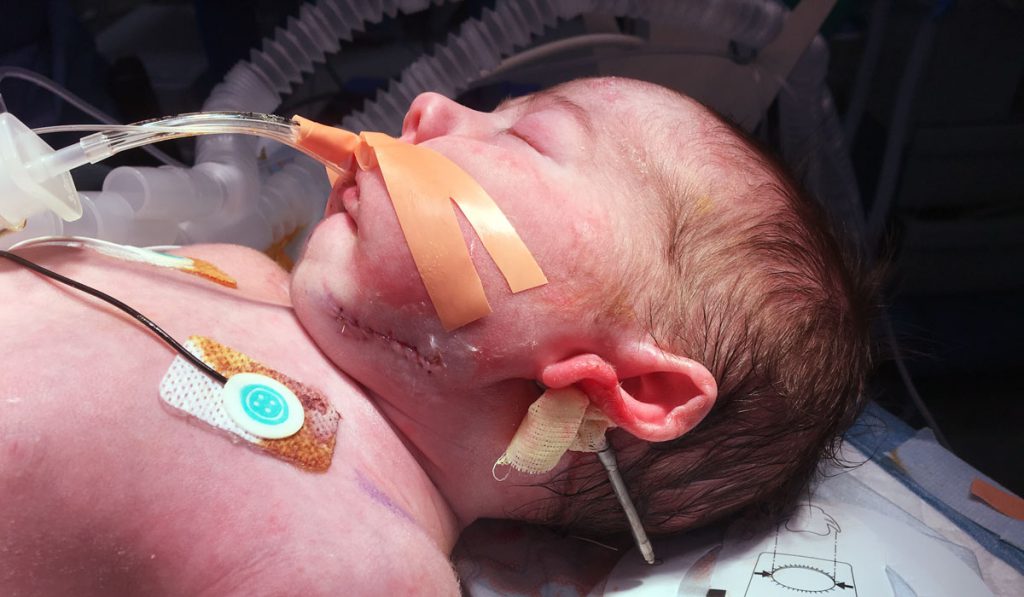 Pierre Robin sequence (PRS) is a condition present at birth involving an underdeveloped jaw that has not elongated sufficiently, forcing the tongue into a backward and upward posture, and often preventing the palate from closing. It can create significant breathing and feeding challenges for newborns. Historically, early treatment options—a temporary lip-tongue suture, or tracheostomy and a feeding tube—left families no option but to wait, hoping that growth over time would create more space for the tongue.

The application of distraction osteogenesis 15 to 20 years ago enabled surgeons to gradually elongate the mandible bone, but early efforts with PRS babies required weeks spent in an external fixation system while their jawbones grew. “Aside from the practical concerns of navigating the hardware and keeping the wounds clean, there is also a more obvious indication of the baby having a problem, being different,” said James Phillips, M.D., a pediatric otolaryngologist at Monroe Carell Jr. Children’s Hospital at Vanderbilt.

Phillips now performs mandibular distraction osteogenesis for PRS using a new implant that eliminates the bulky apparatus formerly required. After recovering from this 2-hour implant surgery, parents can hold their baby and bottle feeding can begin sooner. “While there are still issues that can arise, this version of the mandibular distraction procedure can most directly reverse the abnormality while making it easier for families to be with their babies,” Phillips said.

The Challenges of PRS Oral Malformation

“These infants are in NICU immediately after birth and need intensive support. The sooner we can safely treat the condition, the better.”

PRS is relatively rare, affecting up to 1 in 8,000 live births. While 20 to 40 percent of cases are isolated, the rest are syndromic, involving other organs and tissues in the body, such as Stickler syndrome or campomelic dysplasia.

“These infants are in NICU immediately after birth and need intensive support,” Phillips said. “The sooner we can safely treat the condition, the better.”

The first challenge comes from the tongue position causing apnea and challenges with the suck-swallow-breath reflex. The second comes from often coexisting cleft palate, that makes normal feeding challenging because the baby cannot create suction.

Distraction osteogenesis procedures are based on the discovery that by breaking a bone with a clean cut and gradually moving the separate parts away from each other, new bone will form between them. The timing of the outward adjustments is critical to success. Too fast, and the ends get too far away from each other too soon. Too slow, and the bone becomes too solid for further elongation.

In the earliest approach to mandibular distraction osteogenesis, a surgical team would move the jaw each day, cutting through the bone and using an external apparatus to supply the separating force. Typically, the process entailed a week of distraction while the bone elongates.

Phillips says the newer implant alternative offers babies and their parents a more normal life. After an incision in the bone, just in front of the mandible on both sides, the surgeon implants metal plates on both sides of the break. A small distraction arm protrudes from behind the ear, and a screwdriver-like tool is used to incrementally crank the bone further out as more bone forms between the severed ends.

“As the jaw comes forward, it brings the tongue forward, and the baby is able to breathe on their own, and then feed on their own,” Phillips said.

Better for the Whole Child

To date, Phillips has performed nine mandibular distraction procedures using the implant. “All of these children have avoided a tracheotomy and five were able to avoid even a short-term G-tube,” Phillips said. “My goal is for them to go home without the need for any tubes and to feed, breathe and behave as normal babies do. That is a very achievable goal that would not be possible without this procedure.”

Phillips says the new mandibular distraction procedure is part of Vanderbilt’s vision for building a multidisciplinary clinic focused on cleft palate issues. “PRS is one highly specialized area within cleft lip and palate care. Children with other spectrums of cleft lip or palate have their own concomitant issues. They all can benefit from ongoing support from a comprehensive team, including a cleft surgeon, speech therapists, audiologists, geneticists, dental specialists and neuropsychologists,” Phillips said. 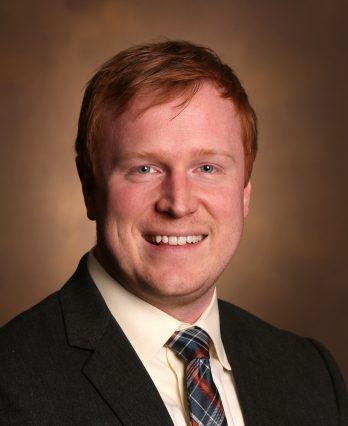 James Phillips, M.D., is assistant professor of otolaryngology at Vanderbilt University Medical Center and a clinical otolaryngologist with Monroe Carell Jr. Children’s Hospital at Vanderbilt. His focus is on facial plastics and reconstructive surgery that addresses pediatric cleft lip and palate and vascular malformations.

In a first of its type, a Tennessee study offers a model for better understanding factors present in regions of higher risk. 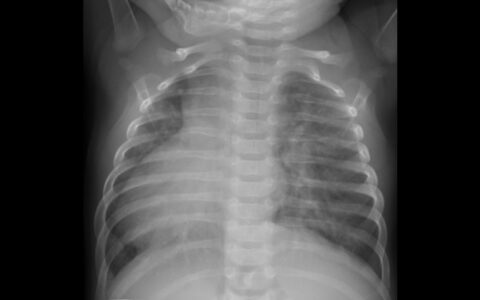