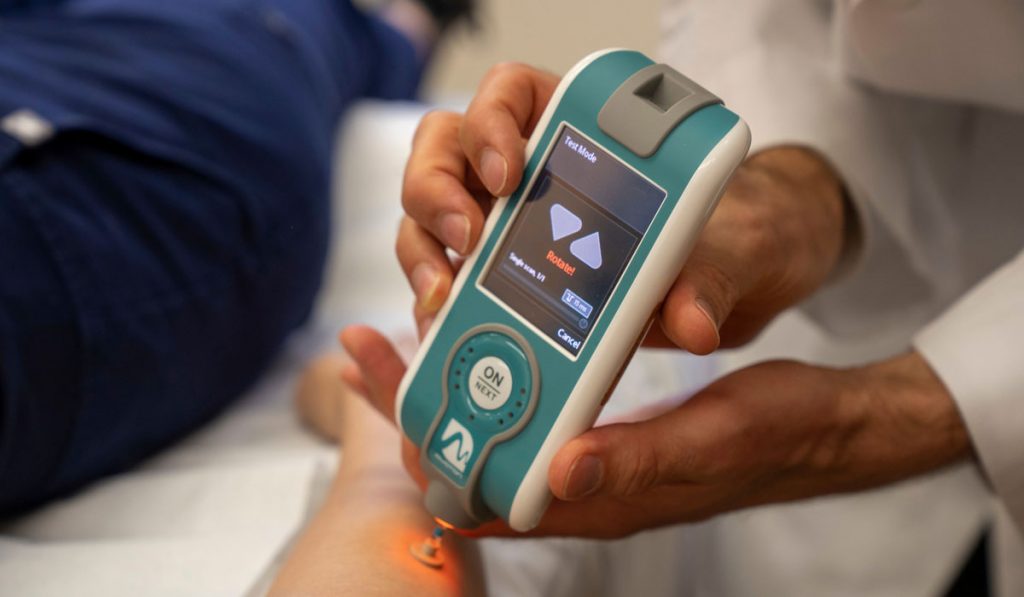 Skin dynamic stiffness, tracked longitudinally, can be used to identify clinically important changes in sclerotic chronic graft versus host disease (cGVHD), according to new research published in Bone Marrow Transplantation. The study addresses the growing interest in more reproducible measures for grading cGVHD sclerosis than the current gold standard, the NIH skin score, which is considered coarse and subjective.

“We really don’t have a way that is very sensitive to tell if patients with sclerotic cGVHD are getting better,” said Eric Tkaczyk, M.D., lead author on the study and director of the Vanderbilt Dermatology Translational Research Clinic at Vanderbilt University Medical Center.

“Clinicians are put into the difficult situation of giving patients significant treatments that have severe side effects and not knowing whether the patient’s disease status is improving or worsening,” Tkaczyk said. “We’re hopeful that this objective approach to measuring sclerosis might be used to guide patient care and the development of new treatments.”

The study is one of the largest longitudinal quantitative studies of sclerotic cGVHD to date.

GVHD is a major barrier to the successful treatment of hematologic malignancies and many other diseases that can otherwise be cured with stem cell or bone marrow transplantation. “Of those patients who don’t succumb to their original disease that necessitated transplant, the leading cause of long-term morbidity and mortality is chronic graft versus host disease,” Tkaczyk said.

“We’re hopeful that this objective approach to measuring sclerosis might be used to guide patient care and the development of new treatments.”

Skin is the most commonly affected organ in cGVHD, Tkaczyk explained, with 20 percent of cGVHD patients developing sclerosis within 3 years of transplant.

Said Tkaczyk, “As a provider, it’s hard from one visit to another three months later to say, based on memory, ‘The skin feels softer or less soft today.’”

To develop an alternative to the NIH skin score, Tkaczyk and colleagues set out to test whether the Myoton®, a handheld device that applies a brief mechanical pulse to measure soft tissue biomechanics, could be used to measure skin stiffness.

Collaborators on the project include Arved Vain, Ph.D., the inventor of the Myoton and an associate professor of biomechanics at the University of Tartu, Estonia, and Michael Byrne, D.O., a stem cell transplant physician at Vanderbilt. Additional authors include Laura X. Baker, M.D., of Vanderbilt and Yvette Ssempijja, M.D., of Meharry Medical College. 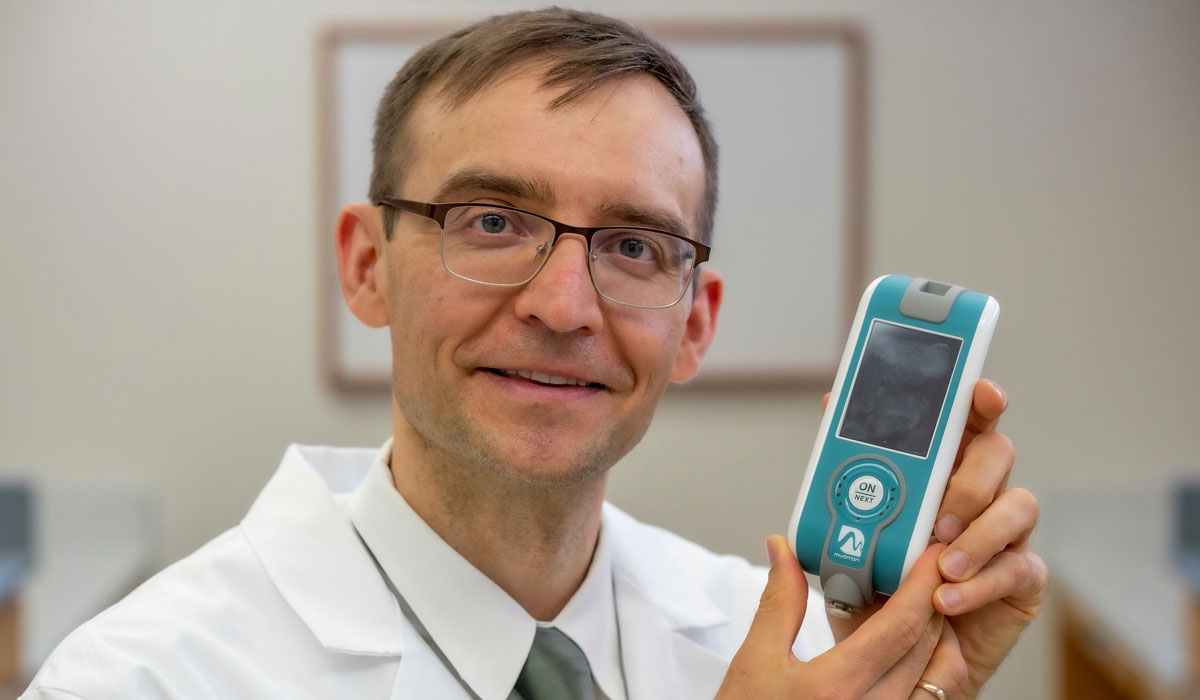 A previous report from the team demonstrated that the Myoton can detect significant differences in skin stiffness measurements between patients with sclerotic cGVHD compared to healthy controls. In the new study, Tkaczyk and colleagues evaluated the ability of the Myoton to monitor sclerosis over time and whether these measurements correlate with clinical disease progression and treatment response.

Included in the study were 10 sclerotic cGVHD patients as well as two cGVHD patients with no skin manifestations. All 12 subjects had at least three measurement sessions over a median of five months. Myoton measurements were then compared to clinical notes regarding provider perception of either partial response, stable disease, or progressive disease. Providers were blinded to Myoton measurements.

“It’s hard from one visit to another three months later to say, based on memory, ‘The skin feels softer or less soft today.”

In contrast, only one of the five patients had a change in NIH skin score. “If the NIH score doesn’t change because it’s not sensitive, then you’re left without information as to whether the treatment is doing anything or not,” he added.

Future work from Tkaczyk and colleagues will focus on optimizing the device to differentiate between stiffness measurements from different layers of the tissue.

“That’s something that is a limitation of our current work with the Myoton,” Tkaczyk explained. “It delivers a brief mechanical pulse to the surface of the skin and measures the way the tissue oscillates. The entire tissue is oscillating together in unison – the skin, the fat, the muscle – so it takes information from all the layers into account.”

A new device that is able to pinpoint how stiffness measurements vary between different layers of the tissue would provide a targeted approach to monitoring and treating deep tissue versus superficial cGVHD sclerosis. 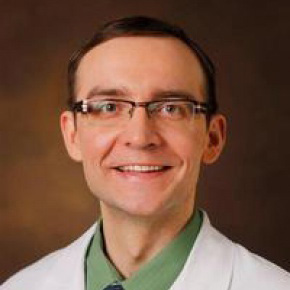 Eric Tkaczyk, M.D., Ph.D., is director of the Vanderbilt Dermatology Translational Research Clinic, an assistant professor of dermatology and biomedical engineering at Vanderbilt University Medical Center, and an attending dermatologist at the Nashville VA Medical Center. His research interests include biophotonics and machine learning approaches to improve diagnosis and treatment of dermatologic and systemic diseases. 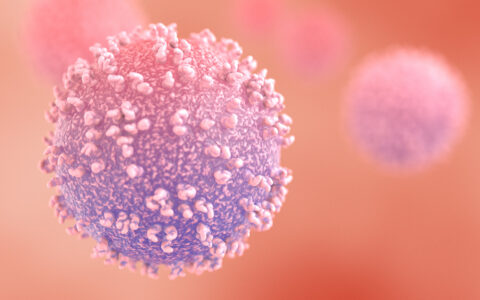 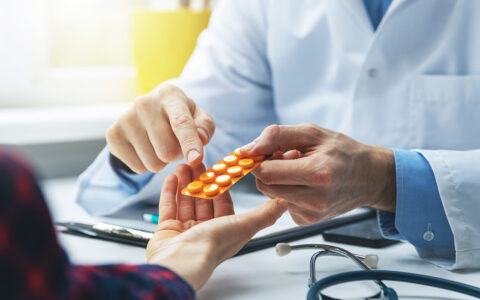 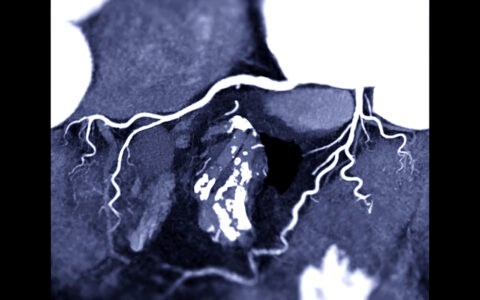